When problems start to happen in a marriage, you might want to leave your partner. But should you get a divorce or a legal separation? This is a hard question because both can change your life in big ways. Here’s everything you need to know about how legal separation and divorce are different.

A separation is a time spent apart from your spouse. It’s when both people in a marriage decide they want to try living apart while they try to work out their problems or decide to get a divorce.

Most people live in different places, which means they have different physical addresses. But living apart doesn’t always mean living in different places. For financial or custody reasons, a couple may stay in the same house even after they’ve split up. In this case, the couple decides not to get married and instead live together as roommates.

A breakup can be either casual or formal. In an informal separation, the couple decides to live apart while they work on getting a divorce without going to court. A formal separation also called a “legal separation,” is something that is approved by the courts and can change how taxes and property are handled.

When you split up, it’s a good idea to make a separation agreement that spells out the important parts of the split. Think of it as an agreement between you and your spouse about how the divorce will work. You want the date of the breakup to be written in the agreement. This is important because it helps figure out if the assets that were built up during the separation become the property of the couple or not.

The agreement will also say who pays the bills and how much money is used to pay them. It’s up to each person to decide if bills will be paid with money from the marriage. In the separation agreement, bank accounts and credit cards are listed, along with information about which ones will be shared if any.

The custody part of the separation agreement is one of the most important parts. This part lists the couple’s minor children and explains where the kids will live and how physical custody will be split. It says if legal custody is still shared and how much child support will be paid while the parents are apart.

There are three different kinds of separations to know.

This is a separation that both people agree to. During this time, nothing is filed with the courts, and it is only supposed to last for a certain amount of time. A couple may try living apart to see if they can work through their problems and get back together.

After the time has passed, if the couple doesn’t get back together, they usually file for divorce. Most of the time, assets and debts are still considered marital property during a trial separation. Many couples do a trial separation without a separation agreement, but this is highly recommended to make sure there are no misunderstandings or assumptions made about assets, debts, bills, and custody.

A permanent breakup is when the two people don’t think there’s any chance they‘ll get back together. Even though nothing is stopping a couple from getting back together during a permanent separation, they should know that it could affect the property they own together. If the couple gets back together, the assets and debts they have together will still be theirs. 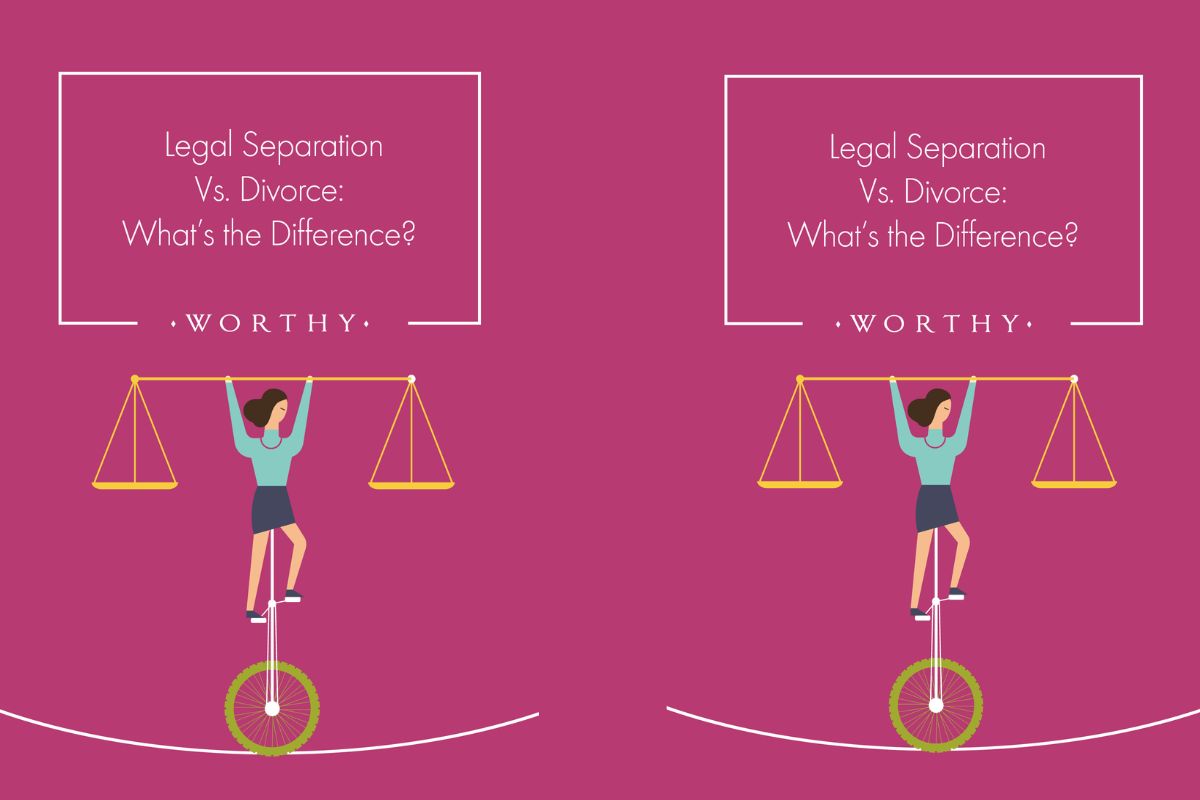 Legal separations go through the courts and get approved. While 42 states allow legal separations and require a process that is similar to getting a divorce. Most of the time, the couple submits a settlement, but if they can’t agree, the judge oversees the distribution of assets and debts between the two parties. If necessary or if the parties can’t agree, the judge will also decide custody and support arrangements.

Some states have rules about how long a legal separation can last, while others let a couple stay apart for as long as they want.

Differences Between Separation and Divorce

When deciding between a separation and a divorce, there are some other important differences to think about.

One of the biggest differences is that spouses who are still married but living apart still have the right to choose their next-of-kin and make medical decisions. When you get a divorce, you lose the right to make decisions about your health or money.

Most states divide property from a marriage based on how much it was worth at the time of the split. In states with community property, a spouse loses the right to property that their ex-spouse bought after the date they split up. If you split up and then get back together, even for a short time, the date of your separation changes, which changes how your property is divided. If you get divorced and then get back together, your assets and debts have already been split.

Most of the time, you can keep your spouse’s health care benefits even after you’ve split up. If you get a divorce, you lose these. This can change, though, depending on the benefits plan, so this should be carefully looked at before you decide to leave.

Either a separation or a divorce gives each person the freedom to live their own life. Divorce makes it official that the couple is no longer together, but a separation agreement is often what a divorce decree is based on. It decides how assets and debts are split, so each person can move on, date other people, and, in most cases, make their investments without being tied to their spouse.

Some states, like North Carolina, make couples live apart before they can divorce. Some states also have to wait periods before a divorce can be finalized, but not all of them do. Even though this doesn’t say that the couple must be separated, it usually means that they will spend the waiting period apart to meet the time requirement for a divorce.

Couples should consider the pros and cons of separation prior to divorce.

Among the pros of splitting up are:

The cons of being on your own are:

The Reasons That Broke Up Kody and Christine Brown’s Marriage!

This is What Ultimately Led to Jessica Simpson and Nick Lachey’s Split!

Man In Jail On Murder Charges: He Is Not A Suspect,…