Are ’90 Day Fiance’ Stars Mike and Natalie Still Together?

Mike Youngquist and Natalie Mordovtseva have divorced, but their story is still being told to fans. The couple first appeared on TLC’s 90 Day Fiancé in season 7, and their drama continued when they returned for season 8 and again in season 6 of 90 Day Fiancé: Happily Ever After? Natalie even opened out about her experience when she returned to the dating scene in season 2 of Discovery+ spinoff 90 Day: The Single Life. Continue reading to find out what caused their breakup after being married and whether or not they could reconcile!

The Drama Of Mike And Natalie Began In Ukraine

Mike and Natalie were already engaged and awaiting a K-1 visa for Natalie so she could lawfully go to the United States as the fiancée of an American citizen when they made their franchise debut. The couple, who met after mutual friends named them godparents to their child, faced a stumbling block when the process was delayed.

Mike scheduled a trip to Ukraine to see Natalie since they couldn’t wait any longer to see each other in person. With the K-1 visa (and marriage) looming in the near future, the couple began to explore major issues such as religion, finances, and whether or not they wanted children — and discovered they had quite different perspectives. They had a huge disagreement the night before Mike was supposed to return to his home in Sequim, Washington, and Natalie placed her engagement ring in his bag. 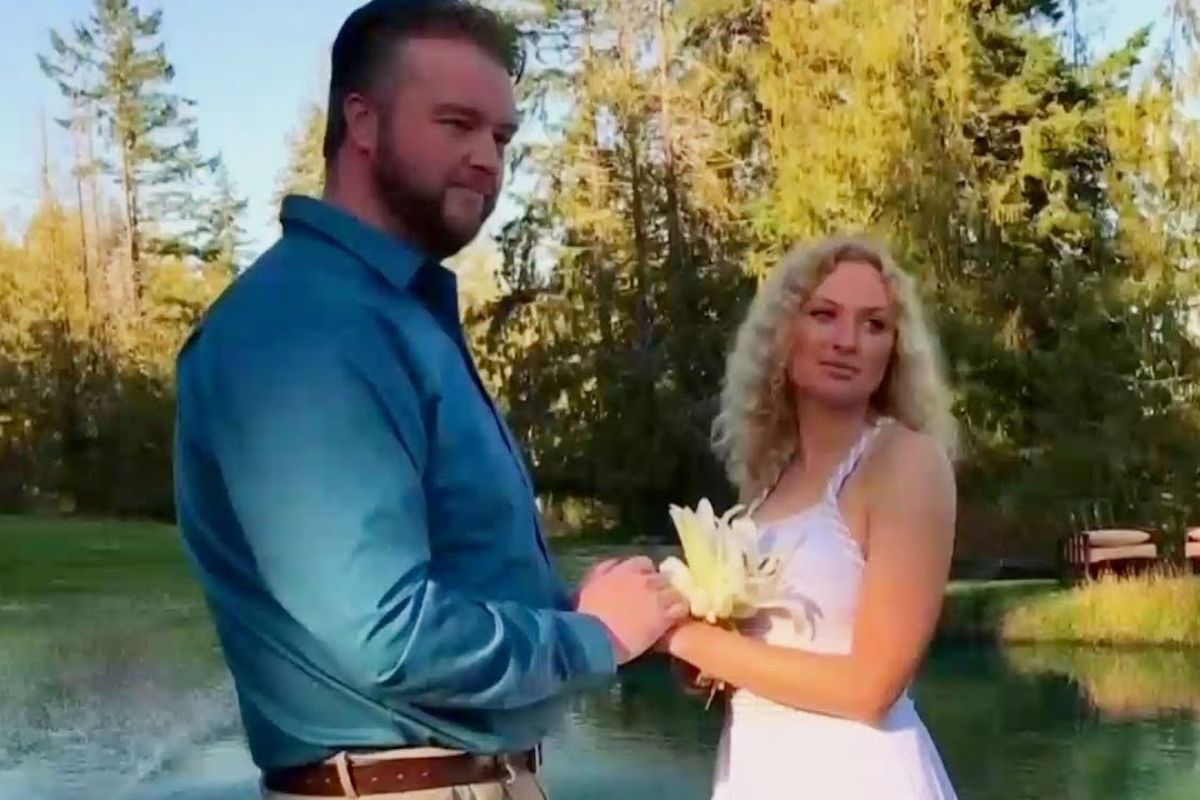 When they returned for the season 7 reveal, they were still dealing with challenges in their relationship. Mike was accused of cheating on Natalie with his female best friend, which he denied. Natalie also stated that her fiancé was not her “soulmate,” despite Mike’s belief.

Mike and Natalie finally got the news they had been waiting for on the season 8 premiere: her K-1 visa had been accepted. Despite the fact that their relationship was still on the rocks, they decided to give it one more shot and utilize the 90 days leading up to their wedding day as the extra time they needed to work out their issues.

Fiance Lead 90 Days Mike and Natalie are enjoying married life after overcoming relationship difficulties. But things took a turn for the worse when Natalie landed in Washington. Natalie struggled to adjust to life on a farm in a remote area after living in Ukraine’s main city, Kyiv, and the couple continued to argue.

They also argued over their opposing lifestyles: Natalie is a vegetarian who does not drink, whereas Mike eats meat and enjoys a beer with supper. They also disagreed on their expectations for their relationship, as Natalie expected Mike to return her ring and begin arranging their wedding straight away. Instead, Mike frequently informed Natalie that he didn’t think they were ready to marry and seemed hesitant to set a date for their wedding.

The tension reached a boiling point when Mike eventually decided to attend the couple’s counseling with Natalie after she pushed on it. Mike told Natalie during their first session that he was no longer in love with her.

During the March 21, 2021 episode, Natalie was in the midst of an emotional breakdown when Mike called off their wedding. “I’ll go to Europe and then work out how I’m going to come home.” I honestly don’t know how. “I’m frightened because it’s a coronavirus, and I have to f—king travel through [the] airport, and it’s f—king scary, and it’s not OK,” Natalie cried as she packed her belongings and prepared to leave his residence. “However, I believe that a man who does this to me does not love me.” And it is my final day in America.”

Mike and Natalie, Are They Married?

Despite the turbulence leading up to their wedding, Mike and Natalie were married. According to internet documents, the couple married on April 15, 2020, in Clallam County, Washington, according to In Touch.

Return Of Mike And Natalie For Happily Ever After?

Unfortunately, the couple’s marriage was not without complications. Their marriage was already on the rocks by the time they returned for 90 Day Fiancé: Happily Ever After? Their scenes looked to have been shot in the fall of 2020, and a major turning point occurred while they were in Oklahoma for Thanksgiving with Mike’s mother, Trish.

Mike and Natalie stayed with Trish at her home throughout their visit, although Natalie felt Trish wasn’t particularly friendly to her. She also felt slighted by Trish on several occasions, including when Trish insisted on taking her to a local butcher shop despite knowing Natalie is a pescatarian when Trish insisted Natalie take a job as an interpreter instead of pursuing her dreams of becoming an actress, and journalist, and when Trish allegedly called Natalie a “hooker.”

Even though Mike and Trish both denied calling Natalie a “hooker,” it was the final straw for the blonde beauty. On the morning she and Mike were scheduled to travel to Washington, she told Trish that she had spoken to her mother, who had instructed her not to speak to Trish. “I apologize. I pay attention to my mother. “Bye,” Natalie said as she walked out of Trish’s house to wait in the car.

Trish and Mike tried to talk to Natalie about her problems, but she refused, and she gave them both the silent treatment until they arrived at the airport. Natalie walked ahead through the airport security line without saying goodbye to Trish.

In the July 25 episode, Mike and Natalie’s feud reached a boiling point. The couple began fighting again while filming their joint confessional because Natalie still believed Trish called her a “hooker” while she was at her home in November 2020. To settle the matter once and for all, Mike instructed Natalie to phone his mother while they were taping their interviews and confront her.

Trish confirmed over the phone that she “never ever” called Natalie a “hooker.” Natalie also asked Trish what she thinks of her and what she did to make her feel that way, and Trish wasn’t shy about sharing her thoughts. Trish told Natalie that she is furious with her daughter-in-law because of how she treats her son and that Natalie is “rude” to Michael “all the time.” Trish also claimed Natalie “manipulates” Mike and that Natalie does not love her son.

The pair began fighting again on Christmas Eve 2020, following which Natalie departed to be with her friend Julia in Seattle. Mike became enraged and sprang up from the couch, yelling across the room. He admitted that his wife has only spent one night in their home with him since Christmas since she spends the majority of her time with Julia. When her spouse asked why she was never home, she explained that they argue “a lot.” Mike went off the set after a heated dispute with Natalie.

Are Mike And Natalie Still Dating?

Mike’s Uncle Beau Lawrence has subsequently verified to In Touch that the two have split up. “She hasn’t been home in a couple of months,” the 51-year-old season 8 alum confessed in March 2021. “I don’t mind if she stays away.”

I’m praying [their relationship is finally finished],” he continued. “I make a prayer to God.” Uncle Beau and Mike’s neighbor, Tamara, appeared on the “Kiki and Kibbitz” podcast together in June. Tamara also confirmed Mike and Natalie’s split, revealing Natalie was the one who instigated the breakup and that she left Mike’s residence on Christmas Eve 2020. Natalie has since relocated to Florida, while her ex remains in Washington.

Mike And Natalie, Are They Divorced?

According to court documents, neither Mike nor Natalie have filed for divorce as of August 11, 2022. Mike was believed to be enjoying his new relationship status as of May 2021. “Mikey and I are having fun again now that I’m single,” Uncle Beau exclusively told In Touch at the time. “That’s correct, but there are more fish in the sea.”

Mike has since been linked to Rock of Love Bus alum Marcia “Brazil” Alves. The VH1 celebrity posted photographs on Instagram of them spending time together in Las Vegas, Nevada, in September 2021. However, she has not uploaded any images with Mike since then, and Mike has not posted any photos with Marcia.

Natalie, on season 2 of 90 Day: The Single Life, discussed her journey to find love again. She documented her life as she moved into her new home in St. Petersburg, Florida, and dated a number of guys. However, it looks like she has yet to find Mr. Right because she is still unmarried.

Who Is Ernest Khalimov, the Guy From the Chad Meme?