Lisa Rinna and Harry Hamlin were one of Hollywood’s most successful couples before becoming the Real Housewives of Beverly Hills. Their love triangle allegedly began with Harry Hamlin, his second wife Nicolette Sheridan, and her alleged romance with Michael Bolton, which Rinna claims led to their divorce.

Before marrying Lisa Rinna, Harry Hamlin had long-term relationships with three other Hollywood women, including two marriages. He met Ursula Andress on the set of “Clash of the Titans,” and after a night of passion while filming, the two had a son, Dimitri, in 1980, according to Yahoo! The couple was engaged but never married and remained together until 1983.

“I was always really possessive… and for Harry, his profession is the most important thing,” she admitted to People after their divorce. Harry later married Laura Johnson from 1985 to 1989, and Nicolette Sheridan from 1991 to 1992. Harry met Lisa in the same year that his marriage to Nicolette ended. According to Screen Rant, this was before Lisa’s blockbuster role on “Days of Our Lives,” when she was still a struggling performer working at an eyewear store. Their romance flourished, and they married in 1997. Although the pair has managed to remain together, there has been significant drama throughout the years.

Kim Richards threatened to reveal a vague truth about Harry to Lisa on-air during a heated discussion on an episode of “The Real Housewives of Beverly Hills” in 2015. Kim eventually failed to carry on her threat, but it got viewers excited about the potential behind-the-scenes conflict between Lisa and Harry. Continue reading to find out what nearly forced the pair to call it quits.

Lisa Rinna had approached producers about perhaps joining the cast of “The Real Housewives of Beverly Hills” prior to Season 5. This produced chaos in her home before the cameras were even turned on. Lisa was concerned about Harry’s reaction to her addition to the series, and for good cause.

“I went to him and said, ‘Okay, they’re interested in me doing this show,'” she told ETonline in a 2015 episode of “Oprah’s Where Are They Now?” Harry was not happy with the concept. “‘Nope. I’m going to divorce you. If you do that, I’m going to divorce you.’ “Lisa remembered him responding. That was his original reaction, according to the “Mad Men” actor. “I have my divorce lawyer on speed dial,” he said to his wife in a 2019 interview with the Daily Beast. “‘You can’t do this,’ I told Lisa. Everyone who appears on that show gets divorced. That show is a nasty, horrible thing to do.'”

Fortunately, calmer heads prevailed, and Harry removed his finger from the “speed dial,” swiftly changing his mind. “‘I’ve reconsidered. It could be beneficial to you.’ “Lisa remembered her husband telling her about it two days later. The change occurred after Harry spoke with Bethenny Frankel about the possible “branding” prospects that “RHOBH” could provide. They avoided divorce, but there was still trouble. Continue reading to find out how Lisa handled rumors of her husband’s infidelity. 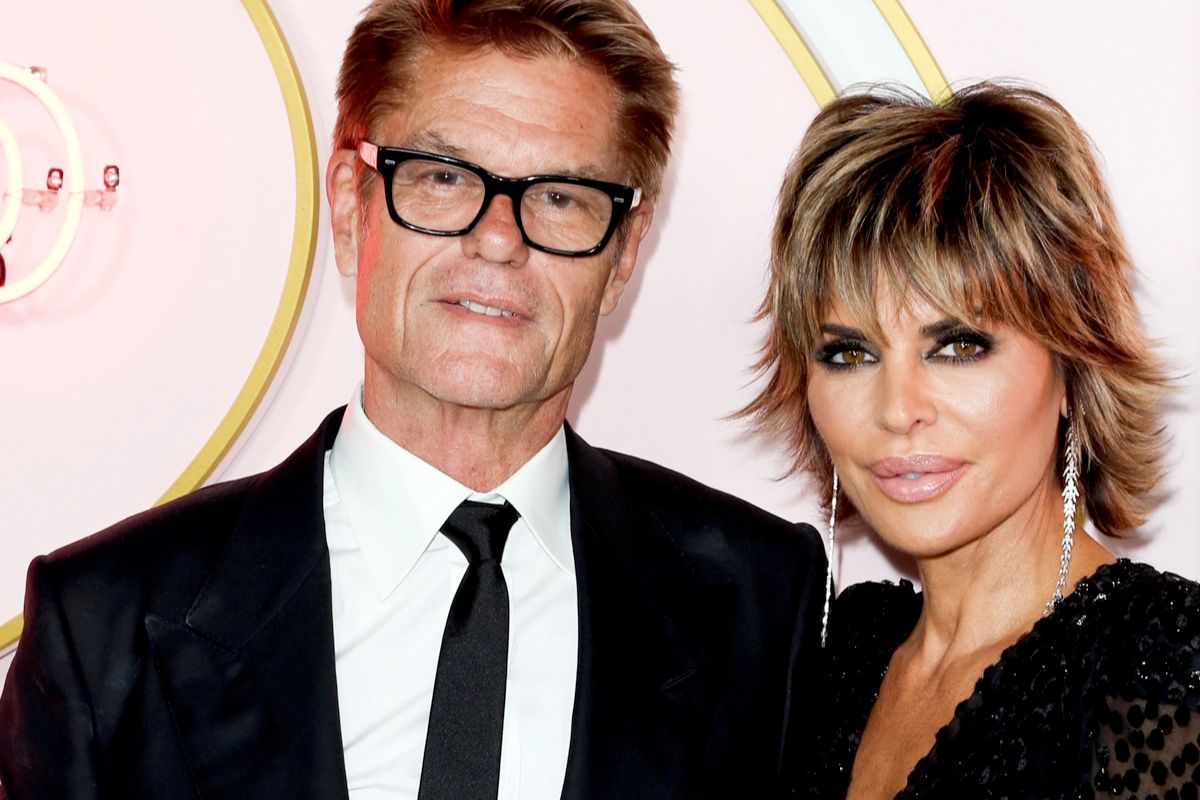 Lisa Rinna took time out of her busy schedule to respond to a fan who claimed on Twitter that Harry Hamlin had slept with a friend of hers. According to Screen Rant, they added, “My girlfriend f***ed Harry Hamlin in Muskoka for an entire summer in 2018 – you want to talk about that @lisarinna?” The “Real Housewives of Beverly Hills” actress remained unmoved and responded.

“Yeah, and it was hot as hell,” Rinna wrote. The reality star apparently had had enough of the trolls regarding her relationship and responded with a clever Instagram post. Lisa posted a photo of Harry on the cover of People in 1987 as their “Sexiest Man Alive.” “Appreciation post to my extremely busy Husband who reportedly does not live with us has a lot of affairs, and is gay,” she wrote, along with hands-raised, heart, and kisses emoji.

Communication has been critical to the couple’s ability to maintain a strong marriage over the years. “We pay attention to one another. Pay close attention to one another “In 2015, Harry told the Daily Beast. “The issue with hearing is that it is not something that humans are born with… Lisa and I do exactly that – we listen “He continued. In addition to speaking, the couple has kept their relationship spicy. Their daughter Amelia Gray Hamlin discovered Lisa and Harry naked in a hot pool when they were on vacation together in August.

.Celebrity scandals travel faster than the common cold, and thankfully for those of us who can’t get enough drama, the huge world of reality TV provides no shortage of material chock-full of shady secrets and illicit affairs. Yet viewers have certainly come to expect the unexpected from their favorite successful series, there have nevertheless been huge on-screen disasters that caught audiences off guard, though it did little to improve public opinion… or one’s trust in humanity.

Is ‘the Bachelorette’ Couple Rachel and Tino Still Together?